Nelli and I have been up to London to meet with the people from Quercus, my publishers. I must say I went there with not a little trepidation. I had misinterpreted an e-mail message that I thought said that American publishers interested in the Demi-Monde were looking for a new ending. DoublePlus Goran Time. The thought of having to conjure up a new ending - and having to sort out its implications regarding the work I've already done on DM2 - did not appeal.

In the end it seemed that all they seem to want is a little streamlining which I've got to admit came as a great relief.

The abiding impression I had of the guys at Quercus was one of enthusiasm. They really seem to like the book and Nick Johnston has a really impressive knowledge of the ins and outs of the Demi-Monde which is essential if the editing is to be in any way sympathetic! It was though a little daunting to sit there listening to their plans for the book and then suddenly to realise that it's my book they're talking about. The level of effort and investment the Quercus is putting behind the book has put a level of responsibility on me to make DM2 as good as DM1.

At the moment I'm struggling with the problem that I've got too many characters. The solution is to amalgamate them...to coalesce two characters into one but it's a tricky exercise. Then there's the complicating factor that the Real-World is much more important in DM2 and the Real-World and the Demi-Monde have to be meshed.

Yeah, at the moment I'm suffering from Too-Much-Novelty-Overload. I wonder if there's a pill to cure it?
Posted by THE DEMI-MONDE at 09:41 No comments:

In order to write about each of the Sectors in the Demi-Monde - which each have a different religion/philosophy - I have to draft a 'religious backgrounder' which serves as a reference when I'm writing. I never thought about publishing them but it seemed a shame to do all that writing and then just keep them locked in a hard-drive.

So the idea was to post them on the web-site as 'NeoFight preDeployment Briefings', that is the sort of things that would be given to military trainees before they were let loose in the Demi-Monde to give them some background about what they could expect there.

The brief I gave to Nigel was to make these Briefings sort of faux-WikiPaediaesque hence PollyPaedia (Polly is Real-World speak for 'Poly Functional Digital Device'). In the end Nigel used the format he'd created for one of my other books 'Invent TEN-N' which as ParaDigm Inc features pretty heavily in Book Two is appropriate.

Thus far I've written two PollyPaedia entries: one for UnFunDaMentalism and one for ImPuritanism (not totally happy with the latter and will be tinkering with it). I've a third finished on Auralism.

I'm pretty pleased with them...see what you think.
Posted by THE DEMI-MONDE at 13:46 No comments: 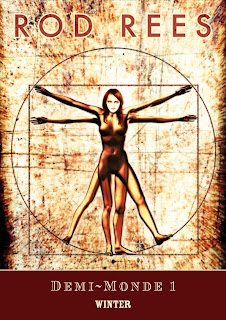 Not a lot to report.

I'm finished the rough draft of Demi-Monde 2...and I'll spend November knocking it into shape and December polishing it. I have a couple of problems with plot development - especially vis a vis Book 4 - which will need some careful thought and I have to rewrite Machiavelli who finds himself elevated from a bit-part player to performing centre-stage but other than that...
I've spent a couple of days writing the PollyPaedia article describing UnFunDaMentalism which I'm quite pleased with. I'm thinking of suggesting to Quercus that this is included as an Appendix to Demi-Monde 1: Winter but if this isn't seen as a good idea then it'll go on the website. Hopefully the ImPuritanism article and the one on Auralism will be finished by the end of next week too.
Other than that I'm just waiting to hear what went down in Frankfurt and doing some background reading on Robespierre and pacifism...
Oh yeah, got a really interesting book entitled 'The World Hitler Never Made' by Gavriel D. Rosenfeld. First time I've met the term 'allohistory'. Yeah...really recommended if you're into alternate history.
Posted by THE DEMI-MONDE at 11:22 No comments:

Everyone seems to be getting excited about the Frankfurt Book Fair which starts this week. Frankfurt is reputedly the largest and most important book fair in the world where all the publishing industry gathers to sell its wares...including the Demi-Monde Series.

So good luck to all those at Quercus.

One piece of pre-Frankfurt good news is that Goldmann Verlag - part of the Random House Group - have acquired the German rights to the first two books of the series. It's quite exciting wondering if someone is going to come in for the French rights, the Scandinavian rights or even the US rights...

I must admit to finding it a little strange to be reading about myself being involved with things - like the sale of the German rights - that I've not really been involved with. It's as though there are two of me: a public one and the one writing the books. Schizophrenia: I know you I've been you.

Regarding the sale of rights, Kit (one of my daughters who is very keen on Manga) is waiting with bated-breath for a Japanese publisher to come in...her dream is to wangle a gig in Tokyo...
Posted by THE DEMI-MONDE at 10:55 No comments: 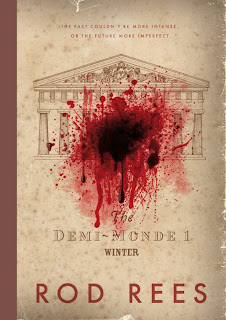 If you're reading this blog you've probably come to it through the Demi-Monde web-site (if not try http://www.thedemi-monde.com/) and some of you might be wondering who did the wonderful design work on display there.
The answer is my very good friend and fellow lunatic Nigel Robinson (and I tell you to get into the Demi-Monde mind-set you've got to have a screw loose). Nigel is a web-site designer and graphic artist who lives in deepest, darkest Yorkshire (poor sod). We were introduced a few years ago when I needed some work doing on Nelli's web-site (she's a fine jazz singer amongst many, many talents) and we've been working together off and on ever since.
The great thing about Nigel is that we're on the same wave-length...he's always willing to push me a little further in my imaginings. Take the maps of the Demi-Monde for instance. I provided him with a copy of my crudely drawn map that I'd been using as reference during the writing of the book and...eureka, he comes up with something exactly right (or even write).
Over the next few months you'll be seeing more of Nigel's work being posted on the Demi-Monde site. I want to get up the Wiki-esque descriptions of the religions and philosophies of the Demi-Monde (UnFunDaMentalism, ImPuritanism, Auralism et al) and Nigel's currently working on this. Also as the Real-World features more heavily in Book 2 (which I'm currently writing) I want to post some of the background sheets I've written to this out-of-kilter reality (moteBots, ABBA, Bennies etc. etc.) and these will be displayed as the faux-GCSE Revision Guides which Nigel designed.
Just to give you a little further taste of Nigel's work, pre-Quercus when I was thinking of promoting The Demi-Monde by myself I asked Nigel to come up with a couple of covers. Now covers are a Publisher's prerogative - they know much better than me who the book's target audience is and what works and doesn't work in a book store - but just for the record here's one of Nigel's takes.
So take a bow Nigel Robinson. You can contact him on http://www.everythingbuttheproduct.com/.

I met a publisher yesterday. Unfortunately it wasn't Quercus.

The wonderful Nelli - my wife - is a glass artist and jewellery maker - who pitched a book to GMC a couple of months ago on glass bead-making projects and she's now been offered a publishing contract. So she and I trained up to London yesterday to meet and greet. The venue for the meeting was the Novotel, King's Cross, which must sell the most expensive coffee in the Smoke...£6.15 for two cups!

Fortunately Jonathan and Gerrie from GMC were more welcoming and Nelli had a good two hours running through the book's proposed content, agreeing the number and complexity of projects etc. Couple of interesting things: it seems that customers of jewellery books don't like seeing their jewellery being modelled as it raises all kinds of issues regarding 'it won't look as good on me as it does on her' and the ethnicity of models.

It also explained why Nelli was working her socks off all weekend preparing for the meeting: her book is going to be puffed at the Frankfurt Book Fair in a couple of weeks. So both 'From Soup to Nuts: Fifteen Beautiful Projects to make Glass Beads and Jewellery' and 'The Demi-Monde 1: Winter' will be out and about at the same time. Interesting.
Posted by THE DEMI-MONDE at 10:24 1 comment:

Got to thinking about the whole writing process.

I am amazed and a little awe-struck when I read of authors who firstly know with mechanical precision just how their book is going to proceed and secondly are able to bash out 5,000+ words a day in the process.

With me it's a little more haphazard,

Sure I know vaguely (very vaguely) where the plot of my book is headed but generally I have no idea how characters are going to develop nor do I have any forensic idea of what twists and turn my storyline might take. It just sort of happens. I find characters take on a life of their own - which is probably why they're all so strange - and as for the plot...well, as I write it evolves and interesting ideas occur to me which just beg to be followed.

It's a hugely inefficient way of working and generally means I have to cull 50,000 words from every book to make it sensible and coherent. But it does mean that I come up with some good ideas. ..well i hope they're good, otherwise it's all pretty pointless.

As for my daily quota: I aim to put down 20,000 words a week. Now they might not be particularly good words but they are capable of being polished and revised.

With The Demi-Monde 2 I'm bang on schedule though writing the tract on what ImPuritanism is was a real stretch. But having said that I'm pretty pleased with how my Dark Charismatics fit right in...
Posted by THE DEMI-MONDE at 10:25 1 comment:

So now I am firmly in the world of Blads (no, I didn't know what they were until a week ago: apparently they're promo brochures designed to puff a book to overseas buyers); conventions (I'm to attend the big Horror one in Brighton in March 2010); photographs (Nelli prowling around all morning trying to make me look interesting); and web-sites (www.the demi-monde.com).

My aim is to make this blog a diary of my adventures in publishing. The next big event is meeting my editor (Nick) at Quercus and meeting John Jarrold for the first time (ours has been a strictly digital relationship thus far).

I'll keep you posted.
Posted by THE DEMI-MONDE at 12:20 No comments: