I was going thru my old stuff a couple of days ago and stumbled across a poem I'd written in praise of Science Fiction. I don't want any comments about my lack of a poetical soul ... I know that!

IN PRAISE OF SCIENCE FICTION

Imagination billows the light-sails of my soul…


Here the foul streets itch and crawl
And dyslexic venom tattoos the walls.
My universe is a construct of fantastic fable...


Here kids slam down venomous vodka
To shut out a world rife with degenerate dogma.
I visit realms that exist on the cusp of belief…


Here is a world peopled by ghouls
The wise and the just ruléd by fools.
I dream of far-off worlds, of wormholes, of plasma drives…


Here hopes are turned to tears and dust,
Chewed and spat out like an old stale crust
I see heroines brave the strange unknown...


Here staccato women thinned by conceit
Live out the maxim you are who you eat.
I see heroes who stand tall and true…


Here the poor, the weak and the old
Are devoured and consumed by the vicious, the bold
I battle with ray-guns and photon torpedoes…


Here politicians fight tooth and claw
And honesty’s got more holes than a ten-buck whore
My mind travels to parallel universes...


they cannot imprison my imagination.
Posted by THE DEMI-MONDE at 11:53 1 comment:

I agreed some time back that I'd be a delegate/presenter/whatever at the 2011 Alt.Fiction weekend being held in the Quad in Derby over the 25th/26th June and now the timetable has landed on my computer.

The first slot I'm down for is the 10 am one on the Saturday where I'm to give a one hour Workshop. Now it'll be a miracle if any bugger turns up but I've been giving some thought to what I'll do if they do. I'm going to dedicate the session to 'That Killer First Page'. In one conversation I had with my agent John Jarrold he advised me that he could tell whether a submission was worth reading by the end of the first page (and often by the end of the first paragraph) so I guess that first sheet is something worth putting a little thought into. I mean, getting that knockout open sentence must be worth a bit of sweat mustn't it? Here's mine: ANYONE COMING TO MY WORKSHOP WITH AN OPENING PAGE OF A BOOK WILL LEAVE THE WORKSHOP WITH A BETTER ONE!

Next up is the 12 Noon gig which is a panel discussion and PodCast (wow!) entitled 'Breaking into Writing'. This makes getting published sounds like a felony but there you go. I'm to be aided and abetted by Guy Haley, Colin Harvey and Pat Kelleher so it should be fun. My aim I think will be to dissuade people from attempting said breaking in on the grounds that there's too much competition as there is.

Finally I get to do a reading in the 'Participation Space' (which sounds moderately revolting and something people making bondage gear are into) from 3pm, my partner in crime being Tony Ballantyne. I'm a tad worried about this as The Demi-Monde contains a lot of swearing, but fuck it ...

Anyway if Alt.Fiction 2O11 is as good as 2010 (which I attended as a punter) then it'll be excellent. Highly recommended and if in doubt try http://altfiction.co.uk/altfictionfest.
Posted by THE DEMI-MONDE at 11:48 1 comment:

A recent comment I got from HarperCollins was that they thought that anyone who had enjoyed Tarantino's 'Inglorious Basterds' would enjoy 'The Demi-Monde: Winter' persuaded me to check the film out.

I've got a ambiguous attitude to Tarantino's work. I thought 'Reservoir Dogs' was, perhaps, one of the best lo-budget films ever made (shows the importance of a good script); I loved 'Pulp Fiction; and the script for 'True Romance' had some of the best dialogue ever committed to celluloid, but ...

But ever since 'Jackie Brown' I've become disenchanted with Tarantino's work and, frankly, a little bored by his films. It reached the point where I couldn't be bothered to go to see them anymore and that's why I hadn't checked out 'Inglorious Basterds' before this week.

So ... All in all I thought 'Inglorious Basterds' was a potentially great film torpedoed by the lack of a strong editor. It must be difficult when you have a film maker like Tarantino, hailed as a genuis and revered as an auteur, to say, 'Excuse me, Quintin, but I think this would be a better film if ...' but that's what 'Inglorious Basterds' was crying out for. It was too long, too indulgent and too bloated to be anything more than 'interesting'. Of course, the Tarantino trademarks were there: the episodic action, the somewhat surreal situations, the cracking dialogue, the neat denouement but these were undermined by a meandering storyline, some ho-hum cinematography, a real lack of tension and some truely weird acting.

I mean, who was Christopher Waltz playing and which comic book had he found him in? What is it with actors asked to play Nazi villains that they automatically reach for the pills labelled 'Over the Top'? Worse tho' was that Waltz's lack of acting chops was signalled from the word 'go' by him having to play against - and be upstaged by - Denis Menochet. That said some of the other acting was terrific (here I'm especially thinking of Melanie Laurent).

The upshot is what do I think those who liked 'Inglorious Basterds' will like about 'The Demi-Monde: Winter'? I hope it's the episodic action, the surreal situations, the cracking dialogue and the neat denouement. I also hope it'll remind them of 'Pulp Fiction' rather than 'Inglorious Basterds'.
Posted by THE DEMI-MONDE at 06:28 No comments:

The first piece of for-publication writing I ever did was twenty-five years ago. I had an article published in ‘Management Accounting’ (November 1986) entitled Thinking the Unthinkable or Overcoming Temporal Myopia. The odd thing is that it’s this piece which has been the inspiration for a short story I’ve just written called Temporal Myopia.

The Management Accounting article described a phenomena I called temporal myopia – the difficulty managers have in considering possible future situations which are outside their own experience and which makes it difficult for them to conceive of discontinuous futures, to embrace the likelihood of change and to act courageously and decisively to mould their organisations such that it is in a position to survive these changes and to profit from them. It went on to explain how a consideration of long-wave economic cycles could be used to help overcome temporal myopia.

The father of long-wave cycles is a Russian economist of the 1920s, Nikolai Kondratieff – a real hero of mine and a major player in The Demi-Monde: Spring – who theorised that in major industrial nations economic activity waxed and waned in a cyclical fashion, these cycles having a frequency of between 48 and 60 years. The interesting thing is that the bottoming of the latest cycle came – you guessed it – in 2008!
It makes me wonder if what I was writing then was more SF than what I’m writing now.
Posted by THE DEMI-MONDE at 03:49 No comments: 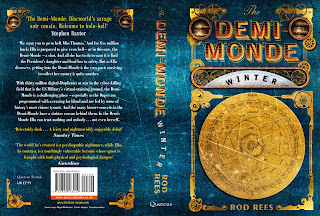 The UK paperback will be out in September so I got the proofs of the cover yesterday. It's essentially the hardback cover (though thankfully with the right map this time) but we've rehashed the blurb on the back which I think is a lot more punchy.

There are also three quotes:

'The Demi-Monde: Discworld's savage noir cousin. Welcome to holo-hell' from Stephen Baxter which is a storming piece of writing.

'Delectably dark ... A feisty and nightmarishly enjoyable debut' from the Sunday Times.

And 'The world he's created is a psychopathic mightmare, while Ella by contrast, is a touchingly vulnerable heroine whose quest is frought with both physical and psychological dangers' from the Guardian.

Personally I'd have gone with Burlesque Bandstand's 'A fucking brilliant book'.

Or even Nigel's favourite: "Occult Stalinist Nazi Vampires versus the Lesbian Supremacists."
Posted by THE DEMI-MONDE at 00:44 2 comments:

HarperCollins in America are obviously busy with designing the US cover of The Demi-Monde: Winter because they asked me if I had any ideas regarding ‘reading lines’ which are the teaser lines which go under the titles of books (check out the 'The Future is Bones and Ruins' tag on the cover of Patrick Lee’s book). I think they’re called ‘shoutlines’ in the UK.


Anyway (with the help of Nigel) this is what I came up with:

• Past Present: Future ImPerfect (I quite like this too).

• Enter a world where nothing is as it was … or as it will be.

• Perversity, thy name is the Demi-Monde (even more terrible).

• Where reality has never been more real … or more dangerous.

• Evil is a never just a game.

• History has come back to haunt us.

• Our past has come back to haunt us.

• Our past takes its revenge.

• You can imagine evil but you can’t contain it.

• A game with rules and without conscience.

• In the Demi-Monde trust nobody … not even yourself.

• Survival is never just a game.

• The past couldn't be more intense... the future more imperfect.

• Get with the Program.

• Persecution, Terror, Genocide... we've got an app for that (this is too close to the apple ads, but I'm sure you could get something good out of that)

• A future, haunted by the past

• A whole world of pain.

• To lose one girl, Mr President, may be regarded as a misfortune; to lose both looks like carelessness (not really).

• NOW your fucked! (not really, again)

• Games without frontiers. It's a knockout. (not really, again, sorry)

It’ll be interesting to see what HC finally decide but it was a fun exercise anyway.
Posted by THE DEMI-MONDE at 23:21 2 comments: