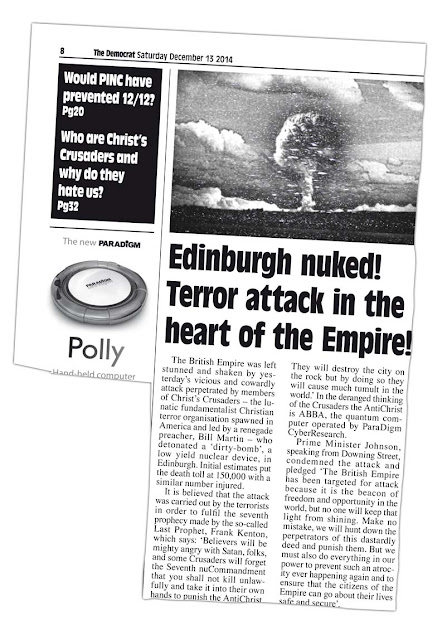 This is the third of the plates that will be included in 'The Demi-Monde: Fall' I'm not sure why I chose Edinburgh to nuke - I went their on my honeymoon and thought it a fine city - but I needed somewhere to waste so the bad guys could convince the good guys to be PINC'd.

I've been playing around with PINC thinking about building a story around it and to this end I've beefed up the definition.


PINC (Personal Implanted nanoComputer) is a neurochip developed by ParaDigm CyberResearch. When implanted in a human brain, PINC gives instant access to the databases held on ParaDigm CyberResearch’s quantum computer, ABBA, which provides each PINC-equipped individual – known as PINCs – with 3 yottaQuFlops of cybermemory, the equivalent to every book, newspaper, instruction manual and leaflet produced since the invention of the written word: PINC has been described as the humankind’s ‘sixth sense’. Additionally, PINCs have the ability to communicate, PINC-to-PINC, via the medium of the ABBA-platformed PolyNet, this communication being known as TelePathy. It is estimated that as of November, 2040, 50% of the world’s population – 4.5 billion humans – have been PINC-equipped. Since it was first trialled in 2015, PINC has been responsible for most of the major economic, political, social and cultural shifts that the world has experienced, including the development of the pan-global, anti-PINC political movement known as The Natural Mind Party. The true impact of PINC on the human brain was revealed in the Reynolds Enquiry, the findings of which were published in 2040.
Posted by THE DEMI-MONDE at 09:35 No comments:

Just finalising the artwork for ‘the Demi-Monde: Fall’. This is noöPINC – the 2nd-generation Personal Implanted nanoComputer – that features heavily (and crucially) in the book. NoöPINC is a cyborg-virus – a virus with man-made elements incorporated into its structure – these nanocybernetic structures acting as inception points for the development of the virus. The virus grows around them and by doing so absorbs the artificial elements into its genetic structure. Artwork as always by Nigel Robinson. 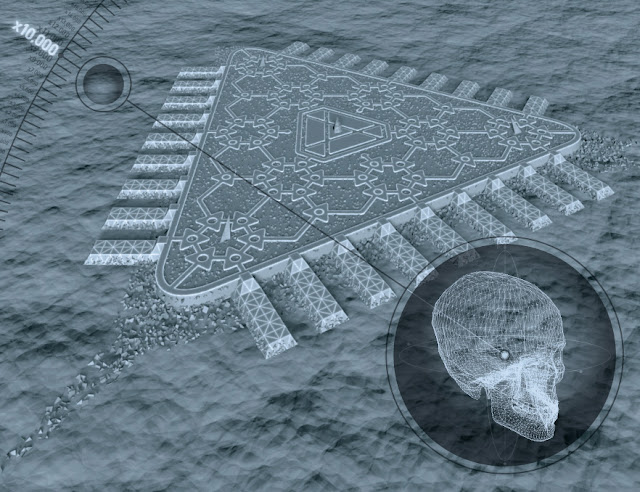 Got to say I'm bloody pleased with it. Sort of captured the somewhat creepy aspect of the device. Well done, Nigel!
Posted by THE DEMI-MONDE at 07:31 No comments: