THE EVOLUTION OF A COVER

Amanda, my editor in HarperCollins, has just sent me the final cover of the US edition of ‘The Demi-Monde: Winter’ (out January 2012, folks) and mighty fine it looks too. Amanda was kind enough to involve me (and by default my designer mate, Nigel) in the design process so I got to see how the cover evolved. I think it’s quite an interesting process.

It all started when I got an email from Amanda in the beginning of April saying that HC were having a cover concept meeting and did I have any thoughts regarding which design elements might be useful for inclusion in a design. So I had a think and below is a précis of what I sent (edited so some of the spoiler bits have been taken out).

The Demi-Monde is an ensemble story told over four books of the protagonists’ adventures in a virtual dystopia locked in a Victorian timeframe. While the story deals with what I hope are serious issues (fascism, racism, eugenics and anti-semitism) I’ve tried to do this in a satirical way and invest the books with humour. They are written to be fast-paced and fun. I’ve also attempted to introduce a Lost-like unexpectedness to maintain the readers’ interest throughout the four books and keep them intrigued. I call this script-tease. The words/phrases I think (hope) best describe the Demi-Monde series are fast-paced, dark-humoured, surreal, thought-provoking and fun. It appeals to females as well as males (and this has certainly been borne out by the reaction in the UK). It is not hard SF.


The basic themes which permeate the four volumes of the Demi-Monde are as follows:


SEASONS: Each volume of the DM is contained within a particular season, Winter, Spring, Summer and Fall. Quercus is intent on showing this via the use of the cover colour (Blue for Winter; Green for Spring etc.).

LOCATION: Each volume is set in a different Sector of the Demi-Monde viz,Winter in the Rookeries of London and in Warsaw; Spring in Paris and Venice; Summer in Peking; and Fall in Istanbul and the walled city of the JAD (a faux Jerusalem).


REAL CHARACTERS: There are new historic characters (‘PreLived’) introduced in each volume. Each of these will be shown on the website by means of a cigar card.


DUALISM: Dualism is a key feature of the Demi-Monde series, viz the virtual Demi-Monde and the physical Real World; and Norma Williams and her doppelganger Aaliz Heydrich.

PURSUIT: The single connecting theme of all four books is Norma Williams and her ‘journey’ from being spoilt teenage brat to sage and peacenik. By the suffering and anguish she endures as she is pursued through the Demi-Monde she grows in maturity and stature.

STEAMPUNK: The Demi-Monde is technologically ‘fixed’ in the year 1870, but some of the tweaks the Dupes have made to their world are quite steampunky (steamers are their equivalents of cars, they use PigeonGrams to communicate etc.).

RUNES: There is a flavouring of Seidr magic in the books and hence quite a few references to runes and other Norse elements. The Valknut rune is the emblem of the quasi-fascist unFunDaMentalists while the combined Laguz sinister and dexter is the symbol of Lilith.

This I followed up towards the end of April by a selection of ‘reading lines' I’d dreamed up (I’ve already blogged about these) and then at the beginning of July Amanda sent this cover mock-up through:

The consensus of the UK jury (me, Nelli and Nigel) was that it was a good cover – a sort of cross between ‘The Lost Symbol’ and ‘1984’ (not bad references) and that the eye was clever – but we had a few concerns. These mainly centred on the thought that the cover's two parts (the cityscape and the rest) don’t seem terribly well integrated. The cityscape looked a little like an after-thought and whilst the cityscape we used on the website was an amalgam of the skylines of Washington, London and Berlin (with the Eiffel Tower shown in the background) the one on the cover didn’t communicate this feeling of wrongness. Perhaps, we opined, if St Basils from Moscow was shown near to St Pauls with the Eiffel Tower across the river, this would give a better sense of unease.We also suggested that there should be more steamships on the river (it is 1870, after all).  Nigel wasn’t too happy with the title font (but then Nigel's got a font fetish) thinking it neither fish (Victorian-esque) or fowl (digital). There was a thought that the title would be better if it were centred and that ‘Winter’ could be strengthened.

A couple of days later this is what came back. Heaps better, especially regarding the make up of the cityscape! But ever one to push my luck, I observed that it might be better to run the gold border into the rip off of the cityscape i.e. no horizontal border 2/3rds of the way down, the one bifurcated by the Valknut. I thought that if this was ditched it would lessen the impression of there being two parts to the cover, especially if the rip wasn’t so square to the edge. I was still missing my steamships on the river and I wondered why we needed to state that it’s ‘a novel’. I also showed the cover to Kit, my writer-in-waiting daughter, and she liked it BUT didn’t think it was very girl-friendly, so I added one thought: how about making the eye a female eye? Nigel STILL didn't like the font!
Amanda had also been pondering on reading lines, now leaning towards “Where nothing is as it was … or as it will be.” Or “Trust nobody … not even yourself.” Or “Someone’s always watching”. I weighed in with “A Past that wasn’t … a Present that isn’t … and a Future that mustn’t be.”

This was the final iteration of US cover Mark I and I thought it pretty damned good, especially that the burn/tear line was no more asymmetrical and the horizontal gold border had been ditched. This was the cover that went off to the Sales/Marketing Meeting that makes the final judgement on covers.

They obviously weren't keen. It seems they thought it a tad too travelbook-esque and wanted something funkier.

So without further ado, ladies and gentlemen, I give you the final US cover of 'The Demi-Monde:Winter' (and bloody brilliant it is too!!!!!!) ... 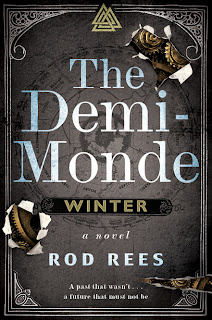 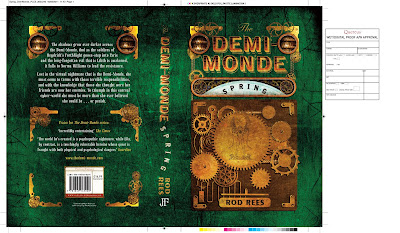 I got to see the final cover of UK edition of The Demi-Monde: Spring today, that's the second book in the DM quartet. Each of the four books is set in a season so following on from the blue of winter we have the green of spring. I think it looks pretty good and I'm quite happy with the blurb on the back (I should be, I wrote most of it!). I had wanted to do something a little more radical with the blurb: pigeongrams feature quite heavily in Spring so I concocted a Blurb-o-Gram which went like this:

I thought it added a certain je ne sais pas but the consensus was that it was too much. Shame
This second book features the character of Lilith quite heavily so I thought it appropriate that she was there on the front cover. Book sellers' sensibilities were such that she couldn't have any visible nipples so this is what Nigel came up with in the end. Anyway, the upshot is that this is the book which will be hitting the bookshops in the UK on the 27th December!

I've been neglecting my blog. I've set myself a target of having the beta-version of the final Demi-Monde book 'The Demi-Monde: Fall' finished by the end of August and although the first half of the book (confusingly called 'Book 1) which takes place inside the Demi-Monde is in pretty good shape, the second half (you've guessed it 'Book 2'!) which takes place in the Real Wolrd has proven to be a real pig.

In Book 2 I'm trying to pull together three main plot threads which although interlinked are bloody complicated in their own right so all I seem to have been doing is wrting reams and reams of exposition. Not terribly exciting to write and a damned sight less exciting to read. It all came to a head this morning when I sat down at the keyboard and hadn't a bloody clue what I was doing there. As I've always found from experience the last thing to do is give up, so I started writing 'filler': bits I might be able to use to up the thrill quotient in the story. Once I've got some mileage done I always feel better, so after ponding out 1,500 words of total crap I had a little ponder and bits started to drop into place. It ain't perfect and it'll need me to go back and re-write a couple of chunks I'd thought were done and dusted but there is certainly light at the end of the tunnel.

I've also got a killer twist for a denouement.
Posted by THE DEMI-MONDE at 10:50 1 comment: